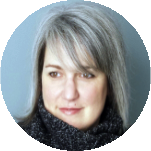 In the spring of 2014, at 37 years old, I was diagnosed with Stage IIIB nodular melanoma. Over the course of six to eight months, a lifelong mole on my hip had grown, changed in colour, and become itchy. Being a busy working mother of eleven year-old twins, I neglected to have this mole looked at until my daughter insisted I show our doctor while in her office for a sore throat.

Two days later an excisional biopsy was performed and the pathology revealed a melanoma with Breslow depth of 12.5 mm, Clark level 5, and a relatively high rate of three mitoses per millimeter squared. The peripheral margins were quite close at 0.2 mm, however the deep margin was 6 mm. One week after finding melanoma in the mole, I had a sentinal node biopsy, revealing a further diagnosis of metastases. I still struggle to understand these terms, but I do know they have altered my life forever.

Within a month I had a right hip wide local excision to 2 cm margins, and a superficial and deep right groin lymphadenectomy, going home to be on strict bedrest for eight weeks. I had four of thirteen lymph nodes positive, therefore I received further treatment post-surgery, in the form of immunotherapy. I participated in a clinical trial at Sunnybrook in Toronto, receiving eight doses of ipilimumab over sixty-eight weeks; four treatments three weeks apart, and then four more treatments, each being three months apart, with the last one in September 2015.

I still have CT scans every six months to maintain surveillance on my melanoma. Although I am considered at high risk for recurrence, to date I am still clear and I am grateful to report that my life has resumed with hope and ambition. I am happy to share my story as it may help someone else feel less desperation in such a scary situation. Living with melanoma is not easy, but we are not alone.

Your ticket for the: Natalie’s Story