BCC is the most common cancer in the world, with incidence exceeding that of all other cancers combined. 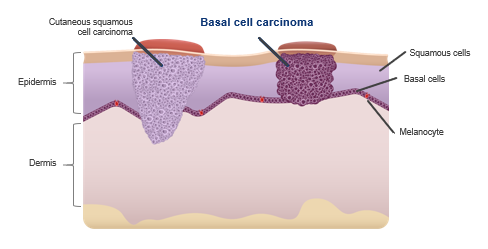 BCC can develop anywhere, though it is most commonly found in sun exposed areas. It is possible to have more than one BCC. It is rare but possible for BCC to spread, or metastasize – it is estimated that ~1% of BCCs can be classified as advanced BCC. (Mohan SV & Chang ALS. Curr Derm Rep 2014;3:40–5)

Advanced BCC encompasses a heterogeneous assortment of cases, including metastatic BCC as well as locally advanced BCC (for which no formal definition exists but which generally includes large, deep, aggressive, or recurrent tumors).

Most BCCs can be effectively treated with standard surgical excision, Mohs micrographic surgery, curettage and electrodessication, radiotherapy, and/or superficial field therapies (including 5-fluorouracil, imiquimod, and photodynamic therapy); however, a minority of patients develop advanced BCC.

In general, this classification often includes large, aggressive, or recurrent tumors or those with deeper penetration into the underlying skin and surrounding tissues.

Metastatic BCC is defined as primary cutaneous basal cell carcinoma that has spread to local or distant lymph nodes or to distant organs or tissues.

BCC can be classified into indolent or aggressive subtypes:

Aggressive subtypes – such as morpheaform, micronodular, infiltrative, and mixed histologies that are estimated to comprise 5–15% of BCC. They show the deeper invasion of tissues and a higher rate of recurrence. Frequently found on the head and neck.

Recent clinical guidelines recommend the use of Hedgehog Pathway Inhibitors (HPIs) in aBCC patients when neither surgery nor radiotherapy are an option. There is no approved treatment option or guideline-recommended therapy for aBCC patients who have progressed on HPI therapy or are intolerant to HPIs.

Real-world data indicate that the majority of aBCC patients who progress on or are intolerant to HPIs are managed with surgery or radiotherapy (36%-65%). Other treatment options include HPIs, itraconazole, chemotherapy, or inclusion in clinical trials of immuno-oncology drugs (IOs).

For more information please click below to watch our September 2020 webinar titled Basal Cell Carcinoma: What Patients Need to Know

Dr. Max Sauder, Onco-dermatologist at Princess Margaret Cancer Centre, reviews the latest news, clinical data and other updates as they relate to the treatment of cutaneous basal cell carcinoma (BCC), a common and sometimes metastatic skin cancer.  Dr. Sauder provides an update on skin cancer statistics in Canada, the science behind primary and metastatic BCC diagnosis and treatment, and shares his key insights into what the landscape of metastatic BCC immuno-oncology treatment looks like for the near future in Canada.

This video is also available in French – CLICK HERE to view

NOTE: The information on the Save Your Skin website is not intended to replace the medical advice of a doctor or healthcare provider. While we make every effort to ensure that the information on our site is as current as possible, please note that information and statistics are subject to change as new research and studies are published.

Making awareness and education available is crucial. Since 2006, the Foundation has worked to raise awareness of melanoma and non-melanoma skin cancers focusing on education, prevention and the need for improved patient care.