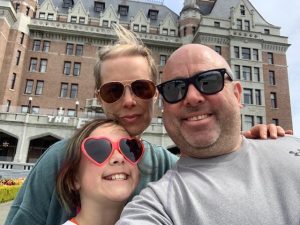 Since being diagnosed with melanoma in 2005, I have had ten melanoma related surgeries, three systemic treatments, four separate radiation treatments, countless scans, and numerous blood transfusions and iron infusions.

My initial lesion was on my upper right arm, and considered lower risk as it was “only” 0.72mm deep. In 2010 the disease reached stage 3, appearing in a lymph node in my right armpit. Although the PET scan following the removal of my lymph nodes was clear, the disease progressed to stage 4 in 2011, when I was 6 months pregnant. It was in my brain, my left lung and my liver.

In June 2011, I underwent emergency brain surgery to remove the two large tumours to increase the chances of survival for our unborn daughter and I. The surgery went well for both of us, and both tumours were successfully removed. On August 5th, 2011 Madeline Delaine was delivered via C-Section; ten days later, I began 2 weeks of full-brain radiation. Before starting my radiation treatments, a CT discovered additional tumours, one in the lung and two in the liver, which were treated in the Fall with 4 infusions of the trial drug Ipilumimab.

I had a 10th surgery in July 2018 to remove a tumour that was close to my kidney. I continued with my treatment with Pembroluzimab for another year and had my 83rd and final infusion on July 31st, 2019. As of today, approaching fall of 2022, I continue to be tumour free!

Your ticket for the: Shannon’s Story