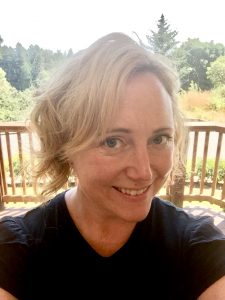 In 2006 I was diagnosed with stage 2 melanoma at age 29 and in 2018 with stage 4. I was always a candidate for melanoma (strawberry blond, blue eyed, sun burns as a child, more than 50 moles) and was receiving yearly dermatologist checks.

In 2006 a small pink bump started growing on my head. At my annual checkup while 8 months pregnant my dermatologist said it looked fine. I told him it bothered me and asked him to take it off. It turned out to be stage 2 melanoma. I had a 1cm margin removed. After my daughter was born I went in for surgery and had another 1cm margin removed and 7 lymph nodes. The margins and lymph nodes were clear. There was no further treatment required.
At the beginning of 2018 I just wasn’t feeling well. I would go to bed for a two hour nap after work and was nauseous when I ate. I also had rib pain that I finally went to the doctor about. He told me I had arthritic ribs and my tiredness was seasonal depression. I asked for blood tests and they came back as something was wrong with my kidneys. I was sent for three more blood tests to confirm that yes, something was up and referred for an ultrasound in April. After the ultrasound I was sent immediately to emergency to get a CT scan. The ER doctor told me that I had stage 4 cancer and to go home and get my affairs in order. I had over 14 brain tumours, the largest being 2.2cm, and too many tumours underneath my skin to count, some the size of golf balls. I had bone cancer in my legs, hips, pelvis, spine and ribs. There was a 10cm tumour on my right ovary, a 5cm one on my left kidney, a 2cm one in the middle of my right lung and small ones on my liver. After a biopsy I learned that it was melanoma but they never found a primary mole.
It didn’t look good, but I believed from the start that I would be cancer free. I had whole brain radiation for a week and then started 4 rounds of immunotherapy (ipilimumab and nivolumab). I had nausea, vomiting, slight rash and extreme fatigue but made it through. I then continued with Nivolumab every two weeks and the only side effect was fatigue. I also had MRI and PET scans every three months. I ended up having a lingering tumour above my right ear and got another week of brain radiation. It has not grown in a year so I believe it is now scar tissue. I had tumours in both femurs that were not responding to immunotherapy and had radiation on those spots.
I also had a new spot grow on my right foot during this time that my dermatologist said was not melanoma and wouldn’t take off. On my next visit I said I think it is something as it is new and he removed the spot. It was basal cell carcinoma. You must be your own advocate!
Spring of 2020 my scans showed no active cancer. Fall of 2020 I had completed 56 rounds of Nivolumab and started getting mouth sores. I am taking a break from treatment and will continue scans every six months for another three years. The last few years have been a blur but I am so grateful to be alive thank you to modern medicine and our excellent health care system. Don’t give up hope.

Your ticket for the: Sara’s Story