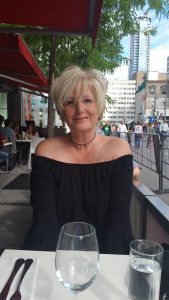 I am 52 years old and I have had a lot of luck; having not met the right people at the right time, I would not be alive to tell you my story.

I am proud to say that I have survived two recurrences of malignant melanoma since my initial diagnosis at forty seven years old.

On December 22, 2011, the doctor called me at work. I had just been promoted to the position of director. The results of a beauty spot that had been removed from my leg came back as T1a melanoma. The doctor planned to make an extended incision for 1 cm and check the sentinel ganglion.

The pathology report came back negative for extended tissue and the sentinel ganglion; I felt very lucky. According to the surgeon, only 20% of T1a melanomas reoccur, so I was not concerned at all. I felt like this episode was an alert, a message to slow down and enjoy life. The kids were old enough now, and I was ready to make a few changes. I took three weeks off work to recover from surgery.

On the fifth day of our cruise to the Bahamas in October 2014, I felt a big nodule in my groin area of the same leg. I knew immediately what was happening.

The surgeon removed seventeen ganglions. Two of them were positive for melanoma, but one was over 3 cm and was extending over the capsula. I received one year of Interferon treatment, over one hundred and twenty extremely painful injections. I took nine months off work and worked under Interferon to be able to pay the bills and the extra for this expensive treatment.

In November 2015, we were very close to the end of Interferon treatment. A PET scan showed multiple lung metastasis. My life expectancy was less than a year. However, I had the chance of being approved to be a part of a trial for a new chemo available in Quebec from September 2015 onwards.

Currently, I have been receiving chemotherapy every second week since December 8, 2015, and will receive it for life with the help of Bristol-Myers. I have a miraculous happy ending: my scan from July 2016 shows a regression of all the lung metastasis.

Chemotherapy is demanding, the sides effects are painful, but I am alive! I am still unable to work but I am thinking of going back one day per week in the near future! I am living proof that, with the help of the latest treatments (Nivolumab/Opdivo in my case), living with Stage 4 melanoma is now possible.

Your ticket for the: Genevieve’s Story