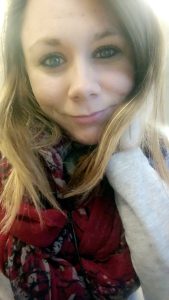 At age 25, my life turned around quickly. I had recently had a baby in March 2016, and everything was going great and I was adjusting to my new lifestyle. I also accepted a new job in the medical field, which included scheduling appointments. I kept scheduling appointments for people to get skin checks and I thought that I should schedule one for myself, as I had an occurrence of basal cell carcinoma when I was sixteen. So, I scheduled a skin exam for myself, and had four moles removed.

Then, on October 18 (my birthday), I got a phone call stating that one mole had come back very atypical and had tested positively for melanoma. They did not know how serious it was at the time, how long I had been walking around with it—  nothing. I was terrified. I was 25. I just had a baby. So many thoughts were going through my mind! A few weeks later I met with my Surgical Oncologist.  We talked about everything and set up my surgery. On November 16, I went in for surgery and a lymph node biopsy. I had two lymph nodes and all surrounding skin removed. I was diagnosed with T1 B melanoma of the abdominal wall. Two weeks later, I got the news that it had not spread to any other lymph nodes or body parts. I now attend melanoma clinic appointments every six months and practice sun safety. This was a scary experience that has resulted in a lifetime of appointments. I want to help anyone I can who is struggling with this disease, and get the word out there that skin cancer is preventable!

Your ticket for the: Erica’s Story