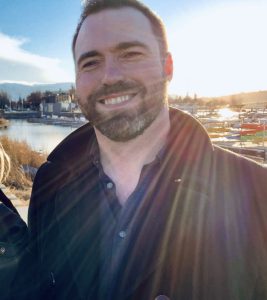 When I was entering the navy in 2002, a barber pointed out a mole that I had never noticed on the top of my head. The same mole made itself known twelve years later, when it began to bleed on a sailing trip. I then saw a Doctor and a Dermatologist, who agreed that it was stage 1B melanoma. I had two surgeries to remove the mole, the second one leaving me with a row of staples along the top of my head. I wore a lot of hats, and even cut back on smiling, because the pressure would stretch the incision!

I spend a lot of time outdoors, and I had always been pretty proactive about wearing sunscreen. But anytime you do forget to wear sunscreen, or forget to wear a hat, you’re at risk for burning and damaging your skin; seeing as my mole was on the top of my head, not wearing hats all the time likely contributed to my melanoma. Before my diagnosis, I had gotten my moles checked out semi-regularly, but moles change – we have to keep up with them.

Your ticket for the: Christian’s Story