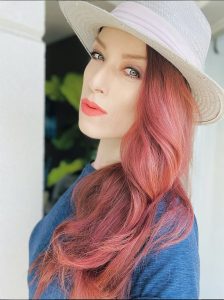 In my late teens to early twenties, I was healthy. I was in nursing school, I ate well, and I worked out several times a week. I also tanned between two and five times a week: the tanning salon was next to the gym and I had an unlimited pass. I thought I was invincible, so for at least five years I tanned at this frequency without considering the risks of melanoma or any other skin cancer.

The mole that was identified as melanoma in 2009 was one of many that had been on my body for as long as I could remember, but it was on my upper back so I couldn’t see it easily. It was my mom who noticed that it was growing and changing colour. I was so busy with school that the mole wasn’t a priority, though that changed when a lymph node appeared near by right clavicle. I went to the university clinic, where the doctor thought the lymph node was a cyst and and that the mole was normal. I insisted on a referral to a dermatologist, which I am so glad I did, because I was diagnosed with stage III melanoma. The dermatologist told me that my chances of five-year survival were 50%, which was devastating news at 25 years old.

I started ipilimumab on a clinical trial in 2009 as the alternate standard of care, interferon only extended survival by 1 year.  Between 2010 and 2012, I had a sentinel node biopsy that revealed two positive lymph nodes, a radical neck dissection and removal of lymph nodes.  In 2012, I began having migraines. which were due to a golf-ball sized tumour in my right temporal lobe. I  had brain surgery and 5 months later a round of stereotactic radiation. At this point, my diagnosis was stage iv malignant, metastatic melanoma and I developed epilepsy as a side effect of radiation.I had a delayed response to ipilimumab but even before brain surgery my brain tumor was shrinking.— I  celebrated my 10 year “cancerversary” in June 2022!

In several ways, my story highlights the importance of preventative measures. My melanoma likely developed in direct correlation with my use of tanning beds; I might have caught the mole earlier if I had been doing skin checks. After I was diagnosed, I went back to the tanning salon and told the owner I had been diagnosed with melanoma. His response to me was: “my mom had skin cancer. It’s no big deal. It’s like getting over the flu.” It’s clear that individuals who might be using tanning beds are not being looked after by people in the tanning industry, so I encourage people now to be proud of their natural skin.

Your ticket for the: Violetta’s Story