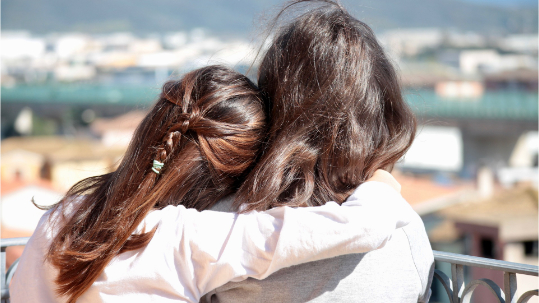 You may have read the Save Your Skin Foundation’s story on the Foundation’s website here…but, as you probably know, everyone has their own story – and Founder and President, Kathleen Barnard’s niece has kindly shared one of her own. Thank you for your inspiring and beautiful story Taylor!

“In May of 2003, I wanted to be an astronaut; a pretty common dream for a child of ten. A less common aspect of my “studying” to be an astronaut was that it was all practical. On any given night you could find myself and Kathleen Barnard – my aunt, neighbour, and favourite person in the world – on her back deck, drinking hot chocolate while I pointed out constellations to her. Also in May of 2003, Kathleen was diagnosed with stage three malignant melanoma.

Melanoma is the most aggressive form of skin cancer, the result of a life spent outdoors. For Kath, this was often on a baseball diamond, either playing or coaching the team of myself or one of her two sons. The cancer manifested itself in a tumour on Kath’s arm, the size of which my family (myself excluded, as I was ten and oblivious) had been watching anxiously. Upon hearing the news, I can assume that Kath was as flawlessly optimistic as she has been every day since. I can confidently say that the only hope or happiness any of us had in that time was in watching Kath’s determination to beat the disease, and her strength has inspired all of us to be stronger in our own lives.

The first form of treatment Kath would undergo was Interferon, which involves a self-injection three nights a week for a year, accompanied by the side effects of hair and weight loss, and flu-like symptoms. Not a process for the faint of heart. Here, I should mention that I was only told about Kath’s illness after she had begun receiving treatments, when her physical changes were going to become too obvious to ignore; the fact that I had no idea that this was going on before she told me, demonstrates how strong she was, continuing to live her normal life by going to work and continuing to coach my softball team for as long as she could. After her year of treatment, we received the news that she was cancer free, and all of us, Kath especially, looked forward to resuming our normal lives.

A year later, in the May of 2005, one of Kath’s checkups revealed a tumour on her lung. Not only had the cancer returned, but had advanced to stage four: the most aggressive stage. This time, Kath underwent Chemotherapy. I was growing older and more terrified at the prospect of losing my aunt, and my life essentially consisted of crying in bed, then crying in my mom’s bed, then getting up and crying at school. Kath’s attitude, however, juxtaposed all of ours; she hosted family dinners and trips to Whistler, getting us all together as much as she could. She would always have some surprise up her sleeve, such as bringing a collection of children’s musical instruments to make a family band (I’m not joking), or Christmas crafts for us to do in Whistler. Even while there was talk of removing her entire lung as the tumour grew, and as her cancer metastasized to her kidney, liver, bones and ribs, she never lost her smile, or showed us how exhausted she must have been.

After extensive and desperate google searches, my cousin found a Doctor in Edmonton who was running a trial drug called Interleukin. The drug had showed positive results in 16% of trial subjects at that point, and no one had yet survived the entire treatment. The trial required Kath (and another member of our family-her husband, one of her sons, or my mom) to fly to Edmonton every second week to spend the full week in intensive care, receiving the drug though an IV every eight hours. While I never went with Kath (though I donated all my pocket money to her flights!), I gathered that the side effects of this treatment included nausea, weight gain, a rash, and low blood pressure. To help herself persevere through the treatment, Kath would write something on each bag to inspire her: things like the names of her family, friends, the girls on my softball team, future vacation destinations. She never complained; on her tongue instead were a million reasons her fight was worthwhile.

After four rounds of Interleukin, Kath was finally declared to be in remission. However, instead of trying to push the thought of cancer out of her mind, Kath and her amazing sister (and my mom) Rosemary decided to start the Save Your Skin Foundation. The fact that you are reading this anecdote right now proves that Kath’s enthusiasm paid off, and the foundation is successful. The Save Your Skin foundation seeks to promote the prevention of skin cancers, such as melanoma, via education and awareness. It also helps provide families struggling with the disease with personal and financial support in finding trial drugs. In short, the Foundation tries to prevent other families from going through what our own family did.

Unfortunately, the struggle was not over for Kath. In 2007, a CT scan showed the presence of a tumour in her small intestine. It was stage four malignant melanoma again, and Kath was immediately hospitalized and given an invasive surgery to relieve the pressure on her intestine. Her surgery and re-starting treatments did nothing but increase Kath’s drive to make sure the Save Your Skin Foundation was a success. She began putting together a Save Your Skin booth at local events, run by our family and friends, to get the Foundation out there as much as possible.

By February of 2008, Kath was flying back and forth between Edmonton and Vancouver again, but this time every twenty-one days and to receive the new trial immunotherapy Yervoy. She had been given four rounds of Yervoy when a new tumour was discovered in her kidney – an organ that she had to have removed in January 2009. After countless late night tea and creamsicle runs, it was over. That surgery, and January 2009, marks the date when Kath’s real remission began, and she has been cancer free ever since.

Since 2006, Kath has worked tirelessly to help the Save Your Skin Foundation grow, and I am pleased to report that it is now an international organization. Along the way, Kath and Save Your Skin have helped so many families who are lost upon receiving their diagnosis. A look at the ‘Survivor Stories’ and ‘Memory of our Friends’ section of the SYS website demonstrates how much amazing work Kath and Save Your Skin has done. I have truly never seen someone so passionate about their work, which is even more impressive when this person should be exhausted.

I am so honoured to be involved in such an important organization, so proud of my aunt, and so endlessly thankful that she’s still here with us. Though I no longer want to travel to space, I’m very grateful that Kath and I are still able to drink hot chocolate on the back deck and look at the stars.”

Thank you again for your story Taylor!