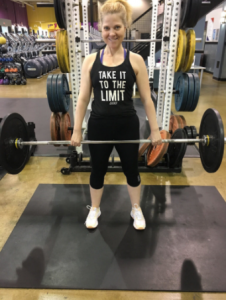 In June 2016 I went to get a mole on right shoulder checked, as it had been rubbing on my sports bra and was becoming irritating. I was a newly certified fitness instructor, and I was on top of the world.
The same day that I went to get my stitches from the mole surgery removed, my doctor had the results: the mole was malignant melanoma. The next month, I had my first meeting with Dr Salopek, a melanoma specialist. He recommended a wide excision and a sentinel lymph node biopsy, which I received in August 2016, however, only tissue was actually obtained in the biopsy, and no lymph nodes were actually taken. The results came back undetermined.
In March 2017, I had an ultrasound, followed by a biopsy three days later. After these tests, it was determined that my melanoma was stage III. At this point, I needed a radical lymph node dissection. I took 25 days off from teaching fitness, and went back to the gym as soon as my drains were removed. The test proved that 3 of my lymph nodes were metastatic, however that was only 3/30 so 97% came back clean!
This diagnosis meant that I would need to begin treatment in the form of a clinical trial with Dr. Symlie. In December 2017, I was taken off this trial after it was deemed ineffective for me. I then had one treatment of Nivolumab, however my scans following that treatment revealed that the nodules in my lungs had started to grow, moving my melanoma into stage IV. I then had a lung biopsy. Two weeks later, I began Keytruda, and continued to take classes and teach fitness while I was on the trial. Shortly into beginning treatment, my doctors also discovered that the treatment had destroyed my endocrine system, and I would need ongoing medication for it.
Around this time, the meningioma that had been in my brain started to change and cause swelling. I lost consciousness during a fitness class on April 25 2018, and had a complete craniotomy on May 5. The surgery took place the day before my son’s ninth birthday, so I was even more determined to pull through. The craniotomy revealed that there was a hemangioblastoma growing at the bottom of my brain stem, and a cyst growing around it. As much as I wanted to go back to the gym two days later, I stayed in Glenrose Rehabilitation for five weeks to relearn how to use my right side, a side effect of my brain injury. And then I drove home!
Now, it’s September 2018, and I am still fighting. Sometimes I want to scream, sometimes I want to cry, sometimes I want to give up, but I am getting stronger every day and have faith that my scans are going to come back clear. If I can go through this year of hell and still find the positives in life, I think anyone can— whether it’s getting a good parking spot at the hospital, warm blankets, or friendly nurses. Some days its horrible, but the only way to not get sucked into the viciousness of this disease is to dry our tears and rise above it.