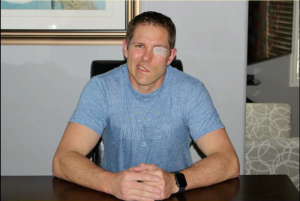 Marcel’s journey is shared with us by his wife.

Marcel’s journey with melanoma started in 2010 when we noticed that a pink, normal looking, healthy mole that he had all of his life had turned black. This mole was located on the left side of his temple. He went to his family doctor and his family doctor referred him to a Dermatologist. The Dermatologist told Marcel that he thought Marcel had hit his mole on safety glasses, and that it was filled with blood. He also told Marcel that a 31-year-old from Northern British Columbia wouldn’t have skin cancer. The Dermatologist performed a shave biopsy, but unfortunately it wasn’t enough to detect the melanoma and the results came back normal. We later found out that the Dermatologist should have excited the whole mole for an accurate pathology, when we sought out the opinion of a Plastic Surgeon in 2011. Finding the Plastic Surgeon is a personal story in itself, and we are very grateful that our stars aligned that day. The Plastic Surgeon was concerned with the mole and suggested that it be removed. The mole was finally excised accurately and a diagnosis of melanoma was confirmed. Following the melanoma guidelines, the Plastic Surgeon performed a five-hour surgery to completely remove the surrounding tissue and lymph nodes. Marcel was considered lucky, as the lymph nodes came back clear and the melanoma had not spread to any other areas of his body. Marcel’s melanoma was only 1mm in size.

Marcel’s chance of melanoma recurring in his lifetime was said to be less than 5%, and he was followed by the BC Cancer Agency for five years.In 2019, Marcel developed symptoms Bells Palsy on the left side of his face, which was later confirmed to be a misdiagnosis. Marcel had a brain tumour that was growing in the fourth ventricle of his brain and his brain stem. Marcel underwent a high-risk surgery to remove the tumour which involved removing a piece of his skull and entering through the brain stem, which controls the central nervous system; therefore he was at risk of death, paralysis, or permanently needing a feeding or breathing tube. Marcel came out of the surgery with double-vision. The pathology of Marcel’s tumour came back as metastatic melanoma, and the melanoma had spread to his lungs and spleen. There are no words to describe the fear and anxiety of a stage 4 metastatic melanoma diagnosis. The Oncologist’s dictation report said: although there have been tremendous improvements in outcomes for CNS metastases from melanoma, it is still an incurable situation with medium overall survival of approximately eleven months, and the two-year survival rate is around 30%.

Marcel is currently six months post-surgery and melanoma diagnosis. The left side of his face is still completely paralyzed, his left eye no longer works, and balance is often unsteady. Marcel is a true warrior: he returned to work within three months of surgery, he was able to ski a couple of times this season with his kids, andhis recent scans are showing excellent response to immunotherapy treatments. It has not been an easy road for Marcel: he has had many side effects from his treatment, and recently had to have a change in treatment due to a life-threatening complication. Marcel will be the exception, though, and he will continue to thrive and live his best life. He will see our beautiful children grow up, get married, and have their own children one day. Please take skin cancer seriously— please be sun safe, please check your skin monthly. Love the skin you are in, as all it takes is one bad ray on one bad day.

We want to thank our amazing family, friends, and colleagues for their ongoing support and love. We want to extend our thanks to the amazing Kathy Barnard, Founder of the Save Your Skin Foundation. Without her compassionate support, superior knowledge, and ongoing love for us, we wouldn’t be here today sharing Marcel’s story. Kathy, her beautiful Foundation, and the people we have met along the way, give us hope. Thank you! I personally want to thank my husband Marcel for being so open with his story in order to raise awareness of melanoma. You are my hero Marcel, always and forever.

Your ticket for the: Marcel’s Story