Posted at 13:20h in BIO by Marianne 0 Comments
3 Likes
Share 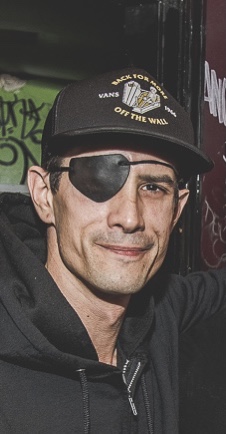 It was around 1pm and my partner and I were playing with monkeys on a beach in Thailand. That’s the moment my life changed forever.

Out of nowhere, as if someone had just pulled a curtain down over my right eye, this “black line” fell about a quarter of the way down over top of my vision. It was super strange and I immediately asked my partner if there was something she could see in there, but she said no. Apparently it looked fine. I had an instant thought that, maybe because we had been doing a lot of scuba diving this trip, perhaps a blood vessel or muscle became damaged due to the pressure under water.

A week later, once finally arriving back home, and this black line still very present, I went to a walk-in clinic. And from that first doctor’s visit, it took another 6 or 7 days and 4 more doctor’s appointments before I finally heard the end result. That’s also when I heard the scariest 3 words ever said to me in my life: You Have Cancer.  Ocular Melanoma.

Since I can remember, I’ve always had such an appreciation for the pure natural beauty that this world is, and what it means to be able to reflect on that miracle alone. To be able to see one’s place in this universe, on this planet, in this life… to simply be aware of what it is to be alive.

I could never get enough of it!

Growing up on Vancouver Island surrounded by endless natural beauty, and having the freedom to grow and learn in that space, was a priceless experience in shaping this view and appreciation I had developed early on. It inspired me as an artist, a musician, and kept me curious about expanding my world infinitely. It gave me the inspiration to pursue those dreams and passions and to let Experiences be my guide. When I graduated from high school, I moved to Vancouver with my band to become rock stars and follow the path of the arts.

Since that move 18 years ago, I have witnessed and experienced my dreams manifest and become reality so many times over, in so many different ways.

It was the reason I met the love of my life.

It was also the reason I found martial arts.

Bujinkan Budo Taijutsu, to be precise. The art of the Ninja. It’s an ancient Japanese art, comprised of 9 different martial art schools of the past and refined into one discipline. This art has been studied and passed down through centuries and, through the time of feudal Japan, the Ninja became known as assassins used to take out leaders of war to alter or prevent battles from ever taking place. But once I began to study the true art as passed down through the ages, and separated myself from what I thought I knew from TV and movies, a whole new appreciation and way of experiencing the world was opened to me.

Ninja were in reality farmers, peasants, and simple people not wanting to live under the harsh rule demanded of the time. Their outlook on life was that of Peace, Love, and Compassion for all things. For Life. But, as well, they had a very different view to fighting and conflict.

What mattered was Life and Death, not Winning and Losing. Fighting to win serves only the ego. Fighting to survive something that is intent on taking your life, is necessity. Whatever it takes to wake up in your own bed, or to protect those that are worth your own life, are the only reasons to engage in conflict or battle. Fighting, or preventing a fight to literally survive, is the only reason to ever engage.

I’ve studied this concept for 16+ years, traveled multiple times to Japan to study with my sensei and the Grand Master of the art. I’ve passed the one and only test given in the art, which is for the 5th degree black belt.

The test goes like this: you kneel on the floor in seiza (feet crossed under your butt, back straight, hands on your thighs, relaxed). The Grand Master stands behind you, holding a sword, and whenever he feels ready (meaning 1 second or 10 minutes, any length of time he wants), he will project at you for a split second the most intense feeling of “Death”, and then proceed to strike straight down on top of your head with the sword. Your test is to sense this intense feeling of “Death”, and to roll out of the way avoiding the sword. That is it. You need to know when your life is truly in danger, and then make the right decision. In modern times, a Boken (wooden katana) is used for this test, but originally, it was done using a real katana. Failure to survive was not an option. And yes, I passed my test the first time 😉!

So what do I do now? There is a very clear opponent trying to kill me, its intention is very clear. And I can’t roll out of the way. No matter which way I seem to move, I can’t escape. And I can’t even see my foe to face it eye to eye. In the past 3.5 years fighting, I’ve had 2 major surgeries, 3 separate rounds of radiation, changed my diet and tried immunotherapy, but nothing has worked thus far. Ocular melanoma, once inside the body, is very rare and can be extremely difficult to treat.

But just this April 2021, my life was changed again! I was introduced to Kathy Barnard of Save Your Skin Foundation. I was made aware of the foundation through my doctors at BC Cancer, who said it couldn’t hurt to give her a call.

It was one of the most important phone calls I’ve ever had the pleasure to make. A brand new treatment for ocular melanoma had just become available this year, but was going to require travel once a week from Vancouver to Edmonton. And not just once but for 12 treatments.

That would mean 12 plane tickets, 12 hotel nights, taxi’s to and from the hospital and airports… and unfortunately, I was responsible for all the expenses related to getting to my appointments. That is until I spoke to Kathy.

Save Your Skin Foundation has become my “secret weapon”. Now I have the ability and support to be able to fight back. Not to win this fight, but to ultimately have the best chance to survive.

Kathleen Barnard is a cancer survivor from 2003. In fact she’s a miracle. Not only for having beaten her cancer, but for creating this amazing foundation for people suffering from all forms of melanoma. She and her foundation have been taking care of All of the expenses I mentioned in order to get me where I need to be, and to eliminate the extra stress and pressure from the financial burden this would put on anyone.

It’s one of those scenarios you find yourself giving yourself a pinch every once in a while, just to make sure it’s not a dream. Well, I can tell you from the bottom of my heart that it’s no dream. Just a dream turned into reality!

To everyone at Save Your Skin Foundation, to all the donators and supporters, to anyone helping in the fight against All cancers, I thank you!