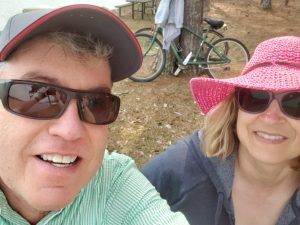 In October 2020, my wife and I were driving home from a Thanksgiving and wedding anniversary trip to Jasper National Park when I felt a pain in my right side.  A week later, the pain persisted, and I saw my doctor for blood work and an ultrasound. This was followed up with a CT scan, which prompted an appointment with my dermatologist and an oncologist in November.  I had already been seeing the dermatologist; in 2014, I had melanoma removed from my shoulder, which had likely developed due to sun burns in my teens and early twenties.

At this appointment, I was told I had stage 4 metastatic melanoma, which had spread to my liver and lungs.  The oncologists discussed immunotherapy treatment with me and it was decided that I would receive ipilimumab + nivolumab. The journey ahead reminded me of the story of David and Goliath— but I knew that with faith, I would stay strong and fight this cancer.

Overall, my first three infusions of the treatment were successful— while I did react to the second dose of treatment, I did not experience other side effects during this period.  However, in December I began to have some facial and swallowing issues, and an MRI discovered that the cancer had also impacted my brain.  I underwent gamma knife surgery which was successful.  However, soon after I began to notice that my near-sighted vision was diminishing, and eventually so did my far-sighted vision, causing me to wear multiple pairs of glasses at a time.  It turns out I was experiencing a rare side effect of immunotherapy, so we paused those treatments.  Into March and April of 2021 my vision wavered and at certain points I was considered legally blind.

In April, I also experienced another pain in my side, much like the first one in October 2020. A CT scan revealed that the tumour in my liver had grown back even larger. At this point they started immunotherapy again, alongside five doses of radiation.  After these five doses, the tumour had thankfully reduced in size again!  My next procedure was in July, when I underwent another gamma knife surgery for a new lesion on the brain.  I then had two eye surgeries in August and September 2021; a consultation with my ophthalmologist had determined that inflammation in my eyes from the immunotherapy had caused my irises to bind to my lenses and also impact my retinas.  These surgeries were successful and I have gained back a large portion of my vision, though unfortunately I am still unable to drive.

At this time (October 2022), I am still continuing immunotherapy treatments. I have stayed positive throughout my cancer journey with no complaints, and I know that with continued faith in God and the love and support of my wife I will continue to fight and win this battle.

Your ticket for the: Gord’s Story