Diagnosis: Melanoma and Other Skin Cancers 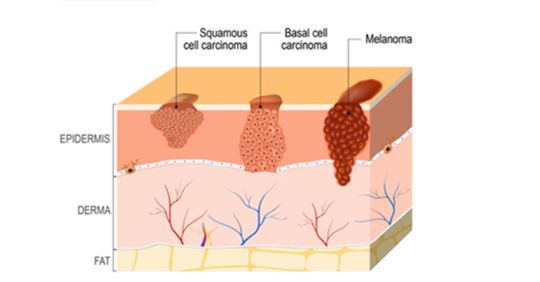 There are several different routes to being diagnosed with melanoma. The first step is generally a physical screening, during which your physician will check your skin for moles or other abnormalities and ask questions, such as if there have been any changes in your skin or moles, or the length of time you have had certain moles. In order to accurately answer these questions, it helps to self-examine your skin monthly to keep track of any changes; more information on moles and skin self-examinations can be found here. During the appointment, your physician will likely also ask you about your medical history, if you have a history of getting sunburned or using tanning beds, whether there has been skin cancer in your family, and other similar inquiries.

If a physician finds something of concern on your skin, they may perform additional tests. These tests are outlined below in some detail:

Is the process of using a hand-held microscope, computer imaging or a dermatoscope to more closely examine a lesion. Your physician might apply mineral oil to the lesion to lessen light reflection on the skin.

Biopsies are also often performed on the lymph nodes surrounding the cancer site, given that cancerous fluid is likely to move through them. The closest lymph node(s) to the cancer site is the sentinel node(s). As the most likely place a cancer will first spread, the sentinel node(s) and sentinel node biopsies (SLNB) are important for melanoma staging and prognosis. SLNB is often used when clinical evidence that cancer has spread to other lymph nodes is lacking. SLNB will generally not be performed in cases where the patient has stage 1A melanoma, melanoma in situ, metastatic melanoma, locally advanced melanoma that has spread to a lymph node, or has already had surgery on a lymph node. Ideally, an SLNB will be performed at the same time as another surgery. If cancer cells are present in the sentinel lymph node, it is likely that some of the lymph node biopsy procedures outlined below will be performed. If no cancer cells are present, it is unlikely that cancer has spread to the lymph nodes.

To diagnose diseases such as cancer, a sample of tissue called a biopsy is taken from a patient and examined by a pathologist to determine if cancer is present. A pathologist will then examine specimens removed during surgery (resections) for conditions such as cancer, to determine whether the tumour is benign or cancerous, and if cancerous, the exact cell type, grade and stage of the tumour. The pathologist, who is a member of your medical team, writes the pathology report that your treating doctor uses to provide the best care for you as a patient. In this webinar, Dr. Alan Spatz provides insight on understanding your pathology report so that you can play an active role in your treatment. Listen to a recording of the presentation here or click here to view the recording on youTube.  With Dr. Alan Spatz, MD  Director, Pathology Department, Jewish General Hospital & Professor, Pathology and Oncology, McGill University

During your treatments, you may receive other tests to determine whether your melanoma has metastasized to other places in the body. These include x-rays, ultrasounds, blood tests, CT scans, or MRIs.

Thank you for reading; we hope this post answers some of the questions you might have had about the diagnosis procedures for melanoma and other skin cancers. If you would like more information, you can look at one of our sources below. While methods of diagnosing skin cancer are relatively universal, be aware that not every website we source content from is Canadian.

Your ticket for the: Diagnosis: Melanoma and Other Skin Cancers

Diagnosis: Melanoma and Other Skin Cancers