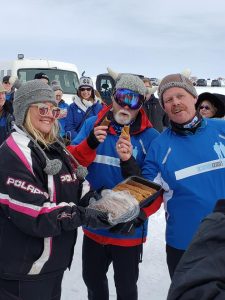 Chris and Shawn’s adventure began when Chris was still in treatment for melanoma. He had started running again to overcome both the physical and emotional challenges he was experiencing and, one day, saw a photo of his childhood friend Shawn Bjornsson. Shawn had just finished a race in -40°C weather. His cheeks were red and his moustache covered with frost. Chris had a sudden inspiration! He decided to challenge Shawn to race across Lake Winnipeg, Canada’s sixth-largest lake. True to their viking roots, they did not back down from the challenge. They began planning, training and fundraising.

The race, which began in Grand Beach and ended in Gimli, took place during the Gimli Ice Festival and attracted a large crowd of people who welcomed the pair at the finish line with cheers of encouragement.

“The weather was ideal, but the running conditions weren’t,” said Chris, recounting how he felt during the race. “There were large drifts of snow across the trail which made the running very hard going. It felt like we were running on sand.”

“But as soon as I saw the crowd gathered at the finish line, I forgot how hard the race had been. I felt an amazing new surge of energy.”

Chris’ story is an exceptional example of human resilience and courage. And like in many stories of melanoma survivorship, Chris had an ally by his side to support him along the way. Shawn Bjornsson has been an outstanding supporter, literally running beside Chris each step of the way on this recent challenge.

“There were times during the run when I thought we wouldn’t make it. Shawn’s encouragement was crucial,” recounted Chris.

Having completed this heroic challenge, Chris Isfeld plans to take some time to rest and spend time with his family.

“To be honest, it hasn’t really sunk in yet that it’s over. I feel so exhilarated! This was the hardest run I’ve ever done, and to be hearing stories of how it’s inspiring others to give back too is just an amazing feeling,” he said.

As of this writing, Chris has raised almost $20,000! The funds raised will go to Save Your Skin Foundation and the patients we help. You can still donate to Chris’ fundraising page here. 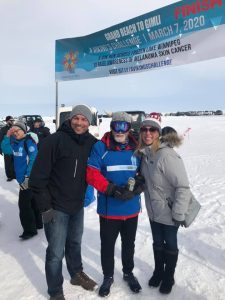 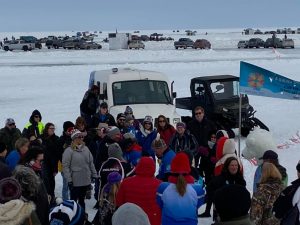 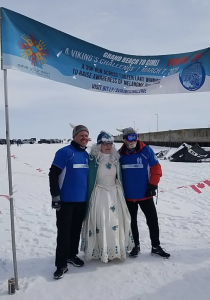 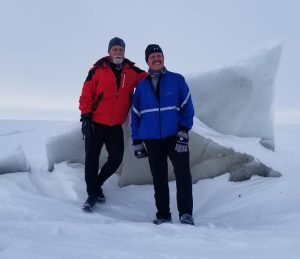 Your ticket for the: ‘A Viking’s Challenge’ Completed