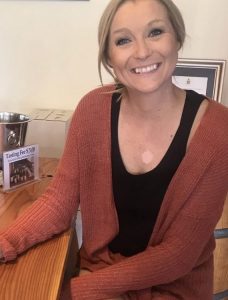 I was diagnosed with stage 4 metastatic melanoma when I was 32 years old. When the first tumor was found, my cancer had already metastasized and the primary location was unknown. I had surgery in 2016 to remove the mass, and unfortunately was left with close margins that required radiation.
.

Soon after, I had scans which showed that the cancer had spread to my liver and lymph nodes and I was treated with Pembrolizumab. Over the next two years I received 25 cycles of Pembrolizumab, had multiple surgeries and more targeted radiation to treat a number of new lesions which presented in my lungs and subcutaneous tissue throughout my body. I suffered mainly from the side effects of the treatments, however was able to resume a relatively normal quality of life through most of this period. I responded to this treatment and eventually had a full response, resulting in a period with no evidence of disease!

Although it was short lived, it was so encouraging to have responded to immunotherapy and I have been optimistic about the advances in melanoma treatment and my chances of survival. My cancer returned months later in 2019 and I was treated with four doses of combination treatment Ipilimumab plus Nivolumab, followed by Nivolumab alone. I had a number of surgeries over the next year and showed some signs of response to treatment. Eventually, my disease progressed and I started my search for alternatives to the approved standard of care. I am currently one year into a clinical trial at Princess Margaret Cancer Center.

I was connected to Save Your Skin Foundation when I was looking into clinical trial options. I had no idea at that time that Kathy and her team at SYSF would become such an important part of my story. Not only has SYSF made the travel to receive treatment possible, but they have become part of my support system. I cannot be more grateful for this organization and the people behind the scenes who make it possible.

Your ticket for the: Ani’s Story